Random Joe, or should I say… GNU/Joe

That’s the bread and butter of industrial scenarists: make the viewer emotionally involved with the characters… then split the elements of each aspect of the story of each character accross episodes, so one episode never resolves everything at once, just one or two elements, and keeps you going with some new one…

That way you use people’s emotion to keep them implicated, and not drop… That’s not how i like to chose what i want to get involved with. I want to be in control, i don’t like to be manipulated in general…

(also if they need these cheap tricks to keep me hooked, it means their series is probably not that great in the first place…)

So the casino of deregulated finance, bringing Earth to its doom while increasing inequalities… was actually started by mafia hand in hand with CIA, and institutionalized by the politicians who enabled them, uh?

link
fedilink
Joe BidettoLate Stage Capitalism@lemmygrad.ml•Gotta admit, the crypto/NFT collapse is turning out to be about as funny as I expected.
link
fedilink
4•4d

Isn’t “I made money and here is how you can make money too” (one of) the base(s) of any ponzi scheme?

link
fedilink
Joe BidettoPiracy@lemmy.ml•Do you download series after they end or while they air?
link
fedilink
7•4d

1/ I know it’s over and i can evaluate the time it takes 2/ it has been recommended enough by people i trust, and i checked that the whole is worth watching, not just the few first episodes being great then taking you to an emotional blackmail into watching the mediocre rest that is just milking you…

that way i dont let myself be emotionally manipulated by endless series of cliff-hangers engineered to make people hooked. my time and emotions are not that cheap.

In practice that’s very few series i watch, but ones that were recommended enough that i know i won’t be disappointed; The Wire, Breaking Bad and very very few other exceptions…

link
fedilink
Joe BidettoVegan@lemmy.ml•Real Vegan Cheese: We add the genes for cheese proteins to yeast and other microflora, and turn them into little protein factories, then make real cheese by adding plant-based fats and sugars.
link
fedilink
2•
edit-2
8d

link
fedilink
Joe BidettoVegan@lemmy.ml•Real Vegan Cheese: We add the genes for cheese proteins to yeast and other microflora, and turn them into little protein factories, then make real cheese by adding plant-based fats and sugars.
link
fedilink
0•
edit-2
8d

mutt in ssh…? but really if you want something “privacy-respecting” you may consider dropping android altogether. (hint: pinephone and other true-(GNU)-linux phones! yay!)

i have some hyper-thematic playlists in which i would rather confidently go random.

but my main playlist = all my music, and my taste is often too varied for random. i would go from Chopin to hardcore techno to African funk to experimental noise to Salsa, etc… that would quickly get too my nerves, especially the rapid changes of mood/speed etc… sometimes it’s good to help me decide about one mood/speed though…

i sometimes set random accross all my music when i dont really know what to listen to, but it’s rare… then when something shows up i feel like listening to, i go back to sequential, my ever-default

Be the mass extinction you don’t want to see in this World…?! :/

thanks for admitting it. speaks volumes about your intelligence! <3

speaking of the Atlantic, read this article:

you’ve been mislead in thinking WikiLeaks releases harmed anyone. the US army harmed the people of Afghanistan, and that’s what this story is about.

1/ journalists do that ALL THE TIME. you protect your source but you are not prevented from asking for more documents

2/ he didnt help escalate anythig. She gave him a hash and he never replied about whether or not it got cracked to anything

3/ it wasn’t even privilege escalation, but allegedly to mask traces, to login from another user. so it would have amounted to helping a source protect herself, if it had been done.

“no qualms” for a journalist facing extradition in a country he is not even a citizen of, for “espionnage”, for revealing war crimes… i wonder what you then have “qualms” about…

You may have got a couple of facts wrong:

"Wikileaks had hundreds of thousands of documents it had gotten from Manning – the war logs and State Department cables — for a considerable period in 2010 and went to “extraordinary lengths to publish them in a responsible and redacted manner,” the submissions to a lower U.K. court said. WikiLeaks held back information while it formed media partnerships with news organizations such as The Guardian, The New York Times and DER SPIEGEL to manage the release of the material. Assange’s legal team cited named witnesses, various journalists who worked with Assange on the process. Those witnesses testified to the rigor of the redaction effort.

The media partners’ work on the Afghan war logs included approaching the White House before releasing them. In July 2010, Wikileaks also entered dialogue with the White House about redacting names. On July 25, 2010, WikiLeaks held back publication of 15,000 documents on Afghanistan to safeguard its “harm minimization process” even after its media partners published stories.

Redaction of the Iraq War diaries was likewise “painstakingly approached” and involved the development of special redaction software. Publication was delayed in August 2010 despite this annoying some media partners because Assange didn’t want to rush.

Un-redacted publication of the State Department cables in September 2011 was undertaken by parties unconnected to WikiLeaks, and despite WikiLeaks’ efforts to prevent it, the legal submissions state. Those who revealed un-redacted cables have never been prosecuted nor requested to remove them from the internet.

The names that were in the warlogs were classified as “confidential” not “secret” or “top secret”. they were in SIPRnet where millions of ppl had access to it. If anyone endangered their sources, translators etc. it’s the US army itself.

It’s pure propaganda to say that Assange “endangered people” when he helped reveal the most important trove of documents that actually helped shift public opinion (and therefore slowing down) this war; while at the same time the US was killing and displacing 100.000s.

(+ it’s true that by helping the US army, those informants, sources, translators etc… were already taking a risk in a coutry at war…) 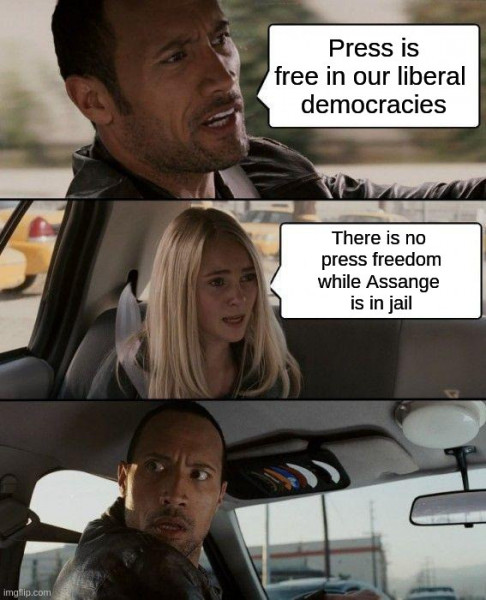 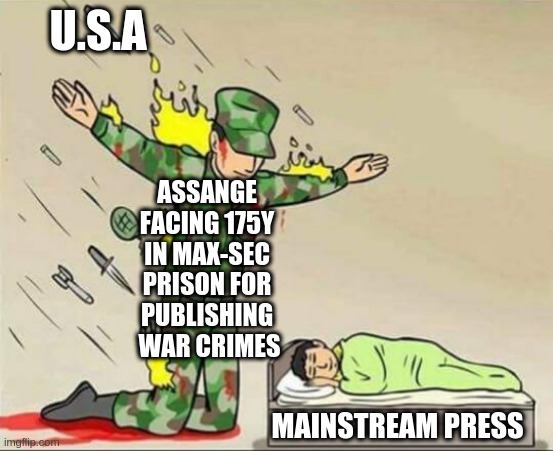 A British judge has ordered the extradition of WikiLeaks founder Julian Assange to the United States, where he faces a 175-year sentence. The final decision on Assange’s extradition will now be made by U.K. Home Secretary Priti Patel. Amnesty International’s Simon Crowther spoke outside the courthou…

there is middleware like these go (mautrix) and rust libs that implement feature-perfect matrix protocol, and evolve swiftly (and with style) and let developpers focus on distinguishing their clients and features. for instance gomuks is based on mautrix…

that way we could see some “hardened” matrix client happen, that would only use encrypted-by-default-and-verified messsages, not allowmultiple keys by default, not send-or-display presence information etc.?

Are you tired of explaining over and over again why crypto-ponzi-currency is bad, hypercapitalist ecocidal scam?

Let this guy explain it for you: …

Are you tired of explaining over and over again why crypto-ponzi-currency is bad, hypercapitalist ecocidal scam?

Ola Bini’s trial today in Ecuador is a farce. …