Lemmy now has private instances, optional registration applications, optional email verification, and temporary bans! These are described in detail below.

Special thanks to @asonix for adding tokio-console and Jaeger + opentelemetry to our dev setups, so we can better identify performance bottlenecks.

Lemmy is similar to sites like Reddit, Lobste.rs, or Hacker News: you subscribe to communities you’re interested in, post links and discussions, then vote and comment on them. Lemmy isn’t just a reddit alternative; its a network of interconnected communities ran by different people and organizations, all combining to create a single, personalized front page of your favorite news, articles, and memes.

Admins can turn this on, and new users will need to verify their emails. Current users will not have to do this.

Admins can now optionally make new users fill out an application to join your server. There is a new panel in their top bar where they can approve or deny pending applications.

This works in conjunction with the require_email field. If that is also turned on, the application will only be shown after their email has been verified. The user will receive an email when they have been accepted.

The instance settings now includes a private instance option, which if turned on, will only let logged in users view your site. Private instances was one of our first issues, and it was a large effort, so its great to finally have this completed.

When banning users from your site or community, moderators can now optionally give a number of days for the ban to last.

It used to be that if a user blocked you, you couldn’t respond to their public posts and comments. This is now fixed. They won’t see your content, but others can.

If you’d like to support development, and make sure that we will always be available to work full time on Lemmy, consider donating to support its development. We’ve spent hundreds of hours on Lemmy, and would like to be able to add more developers to our little open-source co-op as time goes on.

We’ve removed a list of banned users from GetSite, added a few endpoints related to registration applications, made a few changes allowing temporary bans, site settings, made a few changes to the login response. These are non-destructive and current clients should work with this release.

There is a new rate limit for creating new comments in the config.hjson.

Hi, I’m a dev from hexbear and it looks like my first UI changes (relating to post listings) were included in this release.

Here are the changes I made:

I’d love to hear any feedback or ideas anyone here may have.

I’m a fan of the new thumbnail behavior, thanks!

THANK you! Lemmy is feature rich but the UI is so confusing for new users. Super happy to see someone helping out with it :)

Let me know if there’s any specific confusing parts of the UI and I can take a look.

I like to use Lemmy though a browser on mobile, the interface is good (especially compared to reddit) but I think the buttons could be changed a bit to make it better.

I think it might improve the mobile UI to have all buttons at the bottom (sort of like in lemmur):

Buttons that I think would be useful at the bottom:

I wouldn’t know about organizing something like that, but I’m happy to go along.

Awesome! I like a lot of the enhancements on hexbear and can’t wait for the mergening!

Is there anything specific from hexbear you’d like to see here? I’m mainly just going off of what I notice is different, but I could easily be missing things.

a lot of stuff really =]

lol that was actually a bit of an issue when I opened the PR. Apparently it has some accessibility issues so Dessalines is avoiding it. I’ll need to look more into how to use it while maintaining accessibility and work with Dessalines on that.

Huh, I’m not sure I even realized that.

Definitely on the list, I’ve done a bit of research into that but it’ll need some back end changes and idk Rust (yet). I’ll need to see when other hexbear devs get up to speed on contributing to lemmy.

Expanders on the left

Do you mean clicking the thumbnail expanding the embed or post body? I already brought that over for image posts. I can get that going to for self posts as well.

Right now hexbear only has pronoun flairs. We’ve actually been wanting to add user defined flairs too. I’ve put a bit of thought into a generic, instance and community customizable flair system, so that’s definitely on the list.

There’s actually already an option for instance admins to pick the default theme.

Apparently it has some accessibility issues so Dessalines is avoiding it.

Yeah, I knew there was some kerfuffle, but I really hope we can come to a peaceful resolution.

Do you mean clicking the thumbnail expanding the embed or post body?

I meant for posts and comments

I was hoping it would be made into a generic feature where admins can set a white/blacklist regex in the config or something.

What exactly is hexbear btw? Is it a fork of lemmy? Does it federate with lemmy?

It’s a fork of Lemmy made for the now defunct /r/ChapoTrapHouse community from Reddit. It does not federate with Lemmy.

Originally a fork of lemmy, it currently uses both a rewritten front and back end AFAIK (I haven’t actually worked on hexbear’s current codebase). We’re looking to go back to being a proper fork, which is why we’re starting to contribute hexbear features to lemmy.

We don’t federate with lemmy right now because we forked before lemmy had federation, and adding federation to the rewrite would have been too much work. But once we get hexbear stuff into lemmy we’ll switch over and should be able to federate.

Are you going to wait until all hexbear features have been added to Lemmy before moving or do you think you will move over before that point? Any idea how long this will take?

Thanks for the contributions by the way!

I don’t think we have a fixed goal for moving yet, but it will definitely require some of our biggest changes like featured posts and pronouns*.

* Our plan there is to make a generic, customizable per instance flair system for lemmy that hexbear can then use as a pronoun system.

Thank you for the in depth reply! Hopefully that won’t take too long. I had no idea about hexbear nor chaptraphouse. You have quite a big community there!

Oh yes, another release! Thank you all <3

I think I found a bug:

Ive been having this issue for some time but keep forgetting about it right after it happens.

Im most curious about the private instance feature. That could be a great tool for organizations.

Looks great, thanks for all your work.

Wow so much new stuff

Congrats on the new release. The new features are really great

As a sidenote, I wish we stop defining our free/libre projects by starting to compare them to existing proprietary/centralized ones… it somehow diminishes our work and its importance, by always bringing comparison/alternative first. If you consider gimp as “a bitmap editor” it is quite decent… if you compare it to photoshop, it hmm… “pales” in comparison.

I would just invert sentences there:

"Lemmy is a network of interconnected communities ran by different people and organizations, all combining to create a single, personalized front page of your favorite news, articles, and memes. [It is somehow] similar to sites like Reddit, Lobste.rs, or Hacker News: you subscribe to communities you’re interested in, post links and discussions, then vote and comment on them.Lemmy isn’t just a reddit alternative;

to which “somehow similar” can be elaborated to match one’s politics and strategic objectives:

“It is better than reddit, lobste.rs or Hacker News, because it is not bound to commercial interests; you subscribe…”

But by saying “it’s a Reddit alternative” wouldn’t that potentially bring in some miffed users from Reddit who otherwise wouldn’t have considered or joined the site?

It used to be that if a user blocked you, you couldn’t respond to their public posts and comments. This is now fixed. They won’t see your content, but others can.

If a user personally-blocks you, but they moderate a subreddit, and you make a comment on their post in their sub, will they be able to moderate it?

They won’t see it, because they blocked you.

IDK what should be done about that, but it seems to undermine ppls ability to moderate =\

EDIT: I reported it

I noticed an unexpected side effect of blocking: I am apparently blocked by a user I’ve never interacted with, which I discovered because I cannot upvote their posts or comments. Is this intentional? I wish I could ask them why they blocked me, but I of course cannot message them to ask. It makes sense that blocking prevents messaging, but, why can’t I upvote their posts?!

Just a thought (it may already be so): if a group blocks almost all discussion - including polite contrary opinions or facts, perhaps the group itself needs to be reported. The reporting wouldn’t be about censoring or banning, but more about making the power more equal, more Democratic. Yes, users can start their own groups and simply no longer use the group with the leader they think is domineering. But, it seems to still give the leader/creator of the group a bit of unfair advantage and people who want to be tyrants are more likley to start their own organizations. I haven’t thought this idea out and I am sure it is full of holes, but I’d simply like the power of use or access to be as equal as possible between group admins and users. Many positions in life attract those who might weild their power unfairly and I’ve seen that this is also the case in social media groups.

Most of this looks great!

Here’s what I attached: 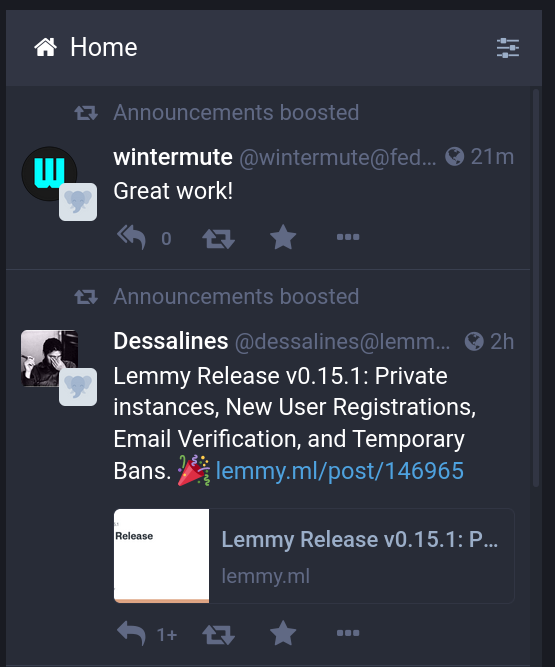 Other than that, this is reserved for admin use only.